The "post election" devils of the U.S. Left's imagination, surface...
Sure gives us a reality check, as MSNBC's "pre-election strategy" was to peg the Tea party as a violent group... But MSNBC air of Ratigan's embrace of "Anti-American left" armed revolution; shows level of derangement.
-View Video at: Verum Serum: 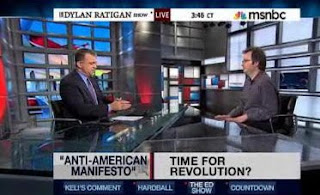 Ratigan often referred to "Tea Party calls" for smaller Gov. via Judicial action, a violent threat... But no SMEAR could stop TEA Party America from picking up 680 state legislative seats and 9 additional governorships...

[MSNBC should fire this Journalist] Once again, we point to the indelible distinction that violence is not an instrument of the RIGHT.

John from Verum Serum:
Ted Rall has a new book out titled The Anti-American Manifesto. In it he makes an explicit call for a violent socialist revolution from within. In case you think this is all a big joke, the excerpt from the book is: [here]

Even bigger question...
Are U.S. Tax-payers still paying for White House MSNBC propaganda; which (after today) call for revolution from within?

Peace will prevail... But I find it odd that Republicans have not yet taken office, and have already sparked the ire and labeling from a paranoid Left... They don't like the Obama moves; but shouldn't the blend of checks & balances be a good thing to work on, now?

Email ThisBlogThis!Share to TwitterShare to FacebookShare to Pinterest
Labels: Election 2010