This is how ALL Americans voted at Carter times of low defense, GOV intrusion, and marginalization of Freedoms, in every area of their lives!


ENLARGE: Image of 1980 Carter/ Reagan Election: HERE
USATODAYGALLUP: Poll Danger Signs; Obama tracks lower than Carter: read.
Obama team & their private Press say that GOP has lost its way, do not have a leader, or have lost their message.... I beg to differ..... This country, in its eleventh hour, will NOT for long take the path that will leave America less Free, less competitive, or overly regulated & intruded upon...

Americans ought to VIEW THIS: VIDEO!
(Below) shocking parallels in controlled disintegration are (again) taking shape. It's Carter history to the letter; as today's CFR re-do! 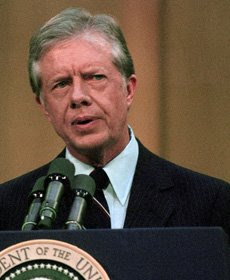 Once the elitist Trilateral Commission's Jimmy Carter was installed as President, the British/American Commonwealth's oligarchical faction transferred the CFR's "Project 1980s" into his administration. Two of the Project's nine directors were W. Michael Blumenthal and Zbigniew Brzezinski; they were appointed Treasury Secretary and National Security Adviser, respectively.

At this juncture, your writer points to the fact that several key policies of "Project 80s," were major issues that dealt with the now hugely propagandized ecology "problems" and the aforementioned, population reduction-- the latter of heightened importance to the self appointed, Malthusian guardians of the world. In this regard, Carter signed the 1000-+ page "Global 2000" ode to sustainable growth, ecology management and population reduction. The volume in its original form underwent an editorial catharsis shortly after release. Some of its most provocative pages betrayed the stark Malthusian visions: the writer's document that 2 billion is the hoped for or preferable number for world population in toto.

Also in this period, many books by sanctioned elitist ecologists and new-age futurologists were widely distributed, especially in the academic halls of vulnerable minds who would become future guardians of the national patrimony. They dealt with scare mongering the American population with issues of unsustainable growth, the future filled with alleged shortages of natural resources, shortages of food, potable water, the grievous state of alleged over population and world destroying pollution threats. -Angie Carlson Excerpt: -FULL.

Today's Links...
Global Warming: Scientists' Best Predictions May Be Wrong: read.
"There appears to be something fundamentally wrong with the way temperature and carbon are linked in climate models."

All the Government programs are inept, and Democrats want to broaden them…
FDA CAN'T EVEN FIGURE OUT ITS OWN BUDGET: Read.

NOTE: Still away (France)...
God Bless you to choose well, America... Some have said that "Freedom is an illusion", but are quick to morn, once it is gone."