Media jumps ahead of "facts research" to broadcast a story...
Oh wait... It's Alaska Governor Palin! She's the one who ran for V.P against six major Dem. Media outlets, a comedy network, & most of European Media.

And yes, let's not look at the trillions of SIGNED earmarks, designed to stimulate a furthering (Dem 2012) Government; let's blame (R) Governors for accepting it... ACE has more: also.

Visit msnbc.com for Breaking News, World News, and News about the Economy

FACT: It is clear that Palin has significantly reduced Alaska's "Pork spending." This should be noteworthy, by those who contend that earmarks are so appalling...

Hot air has more, as Palin’s spokesman, Bill McAllister, tries to set the record straight: read more. (and see below) 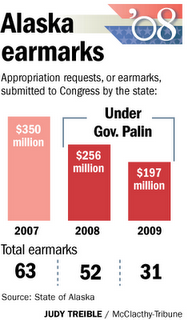 McAllister said:
"The governor never said that earmarks should be abolished or that the State of Alaska wouldn’t seek or accept any. Didn’t happen. What she said well before she was a national candidate (going back at least to October of 2007) was that earmark reform was necessary and the state would need to rely less on federal money than it had been."


For the next year’s budget, Gov. Palin will only make eight requests, totaling $69 million, which will include "six ongoing federal appropriations and just two new projects: an upgrade at the Kodiak Missile Defense Facility, which is relevant to national security, and a bridge replacement critical to construction of the pending Alaska natural gas pipeline, also in the national interest." more.

Quick post: Still away... Annoying to read this, in Moujan...

Today's Links...
Noteworthy Instapundit links:
ADVICE TO THE PRESS: Give Us The News, or Go Away.

WASHINGTON POST: Obama’s New Tack: Blaming Bush.
Hope and Change and it’s not my fault!
But Bush didn’t make him spend a trillion dollars on partisan pork, or spook the markets with destructive talk and policies.